Trawling is one of the most common methods of fishing. Meshing and other forms of nest are also used in the estuaries of NSW. Demersal trawls are used to catch fish and prawns that live on or near the sea floor. Learn more about the Demersal Otter Technique and methods used to reduce environmental impacts. 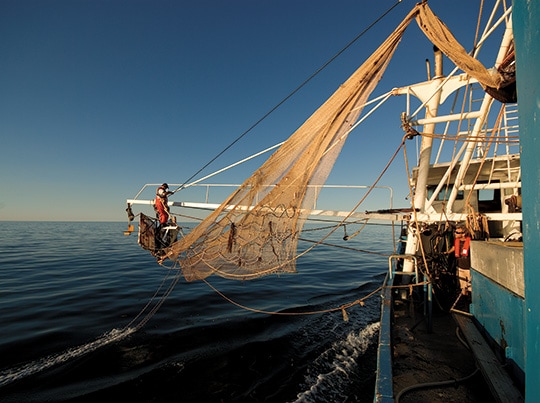 How to catch prawns?

Prawns generally burrow into, or live on, the floor of oceans and estuaries which are usually sand or a muddy sediment.

Prawns are now the most important internationally traded fishery commodity in terms of value and 3.5million tonnes are caught globally each year. As world population has grown the world has needed to design new catching methods to keep up with demand.

Trawling is one of the most common methods of fishing and trawl nets have been commonly used since the 20th century to catch the world’s prawns. Prawn trawl nets are designed to be towed by a boat through the water column (midwater trawl) or along the sea floor (bottom trawl). Bottom trawls (also known as demersal trawl) are used to catch prawns that live on or near the sea floor.

Most prawns are commercially caught using the demersal otter trawl technique; consisting of towing a funnel shaped net leading into a bag (referred to as a cod-end). Otter (or trawl) boards keep the net open as it is towed. A ground chain runs along the ocean floor just in front of the net disturbing the prawns, causing them to jump up into the path of the oncoming net.

Trawlers will either be fitted with twin nets (rigs), as is shown, or tow a single, triple or sometimes quadruple nets. There are other net variations and nets can also be held open by a beam rather than otter boards.

Sonar scans of the ocean floor or aerial views of surface prawn activity help to pinpoint the exact location of a school of prawns, in some waters reducing the time that nets are trawled.

Sometimes, bottom trawling can catch unwanted species of fish or other sea creatures. This is known as bycatch and is monitored through fishery log books  and scientific observer programs

Devices designed to reduce the catch of unwanted species, Turtle Excluder Devices (TEDs) and Bycatch Reduction Devices (BRDs), are fitted to the nets. TEDs allow an escape route for larger fish and animals including turtles, sharks and rays. BRDs are generally designed to exclude catches of smaller fish.